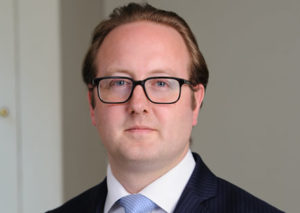 Richard Sarll was called to the Bar in 2005 and specialises in disputes relating to international trade.  He lays claim to a tally of 18 reported decisions ranging from the London Mercantile Court to the Supreme Court, 8 of which were argued on his own, the others with leading counsel.  He is ranked by Legal 500 as a Leading Junior in the fields of Shipping, Commodities and Insurance.  He is described in Who’s Who Legal as “a very good, hard working barrister who gets great results”.  He is regularly instructed to appear against QCs.

In 2019 Richard has been nominated for Shipping Junior of the Year by both Chambers UK and Legal 500.

Richard has an affinity for technical cases and has experience in the following fields amongst others: naval architecture, marine engineering, navigation, deck operations, port set-up and fire investigation.

Richard is a co-author of “Carver on Charterparties”, responsible for a chapter concerning discharge of contract.  He is a co-editor of “Lowndes and Rudolf: General Average and York-Antwerp Rules”, 15th Edition.

Richard’s cases include some of the most significant decisions of the last decade in his fields of expertise.  They include:

Richard holds an Advanced Diploma of the Institute of Chartered Shipbrokers with a concentration in Dry Cargo Chartering.  He is also an Associate Member by examination of the Association of Average Adjusters.

Before being called to the Bar in 2005, Richard attended Jesus College, Oxford University where he read French and German.  He accepts documents in those languages without translation.

Outside of his practice, Richard has enjoyed collaborating with the Chelsea Society on successful campaigns to save Chelsea pubs from closure by property developers.

Throughout his career, Richard has dedicated himself to understanding the affairs of businesspeople.  He has acted for businesses engaged in such diverse fields as construction, clothing manufacture, and luxury shop outfitting, dealing with all manner of contractual disputes.

Shipping & Transport is a mainstay of Richard’s practice.  He is named by Legal 500 2016 as a “leading junior” in this field.   Richard brings a wealth of industry understanding to this area, having commenced his practice by attending weekly evening classes in dry cargo chartering; tanker chartering; and ship operations and management, and subsequently by being coached in average adjusting by a well-known marine consultant.   Rarely amongst shipping lawyers, Richard has experience in both “dry shipping” and “wet shipping”. He also has extensive experience in marine insurance.  He takes pride in being able to provide insights into shipping disputes which take account of all these fields.  With 12 reported cases related to shipping since 2010, Richard is one of the most prominent junior barristers practising in this area of the law.

Chambers & Partners 2015 notes Richard as “particularly well regarded for his admiralty law expertise”. His experience in shipping and transport encompasses admiralty jurisdiction and practice.  He has experience in ship arrest; collision actions; shipowners’ limitation of liability; salvage; and general average.   He has acted in some of the most significant LOF salvage proceedings of recent years, including BP Thunderhorse PDQ, a semi-submersible oil platform which is believed to have been the most valuable asset ever to have been the subject of salvage.

Richard has been involved in a number of significant cases in which fraud has been alleged, including Suez Fortune Investments Ltd v Talbot Underwriting Ltd, The “Brillante Virtuoso”, a high profile marine insurance case worth approximately USD 85 million in which London underwriters allege that the loss was caused by wilful misconduct.

Richard’s practice covers all aspects of insurance and reinsurance (both marine and non-marine). He has particular expertise in marine insurance, and has appeared in some of the most important recent decisions in that field.

In 2012 Richard appeared on his own for an assured clothing manufacturer pursuing a claim under a marine cargo throughput policy - Clothing Management Technology Ltd v Beazley Ltd. Insurers raised 10 defences, all of which were defeated. The case represents an important decision in the law of marine insurance and is referred to by Arnould in its treatment of actual total loss, constructive total loss, valued and unvalued policies, theft exclusions, strikes exclusions, the valuation of insurable interests, and other subjects.  Between 2014 and 2016, Richard has acted for the assureds in the matter of the Suez Fortune Investments Ltd v Talbot Underwriting Ltd, The “Brillante Virtuoso”, a claim under a policy of war risks insurance for the total loss of a tanker which suffered a fire alleged to have been started by pirates.

Associate of the Association of Average Adjusters

Spar Shipping, The Astra and the Status of the Obligation to Pay Hire Punctually: Watching a Falling Star (2016) 22 JIML 345. This article can be found in the December edition of The Journal of International Maritime Law. Please click here to view a copy of the article.

Carver on Charterparties, Sweet & Maxwell, chapter on discharge of charterparties by repudiation and frustration.

On 25 October 2017 the Supreme Court handed down judgment in the matter of Mitsui & Co Ltd & others v Beteiligungsgesellschaft LPG Tankerflotte MBH & Co KG & anor, (“The Longchamp”) [2017] UKSC 86. Stephen Kenny QC and Richard Sarll acted on behalf of the successful appellants.  The Supreme Court reversed the decision of […]

On 7 July 2017 judgment was given by Mrs Justice Carr in the matter of Vitol SA v Beta Renowable SA, a claim for non-delivery of biofuels, in which Richard Sarll acted for the defendant supplier.  The judgment contains an interpretation of interdependent obligations in the sale of goods (e.g. the need for the buyer […]

The “Melissa K” and the “Tomsk”

Surprisingly little law exists on the question whether a pre-action offer made by a prospective defendant is capable of acceptance by a prospective claimant after a relevant time limitation period has intervened. On 27 November 2015 Mr Justice Males, sitting in the Admiralty Court, handed down a judgment which touches upon that question, albeit in […]

Admiralty practitioners and other dedicated readers of the Lloyd’s Law Reports will be aware of a spree of recent decisions of the Admiralty Court concerning the 2-year time limitation period prescribed by section 190, Merchant Shipping Act 1995 for the commencement of collision actions. Those cases are: CDE SA v Sure Wind Marine Ltd (The […]

[2015] EWHC 42 (Comm) On 5th-6th July 2011, the vessel Brillante Virtuoso was taken by pirates off the coast of Aden, Yemen. The pirates ordered the vessel to proceed to Somalia, but after the vessel’s main engine stopped and could not be restarted, the pirates detonated an incendiary device in the vessel’s engine room. The […]

On 24 October 2014 Stephen Hofmeyr QC, sitting as a Deputy District Judge, handed down judgment in the matter of the “Longchamp” (Mitsui & Co Ltd & Others v Beteiligungsgesellschaft LPG Tankerflotte MbH & Co KG & Anor [2014] EWHC 3445 (Comm). This decision is the latest in a spate of cases over recent years […]

Timothy Brenton Q.C. and Richard Sarll are acting for the owners of the “MSC Napoli” in connection with claims by a variety of interests arising out of the structural failure and subsequent beaching of the vessel. The parties are sufficiently numerous that the litigation has attracted the first Group Litigation Order to be made in […]

Gavin Kealey Q.C. and Richard Sarll acted as counsel for London insurers in a claim for a non-party costs order against a director and share holder of a company whose claim for an indemnity had been dismissed. The case puts beyond doubt the availability of disclosure and oral evidence in such proceedings.

[2010] 1 Lloyd’s Rep 59 Richard Southern Q.C. led Richard Sarll for Classic Maritime in a claim under a contract of affreightment which was alleged to have been frustrated by reason of the worldwide downturn in international trade. Practice — Summary judgment — Contract of Affreightment containing arbitration agreement — Parent company guaranteeing charterers’ obligations […]

2009 WL 1062979 Gavin Kealey Q.C. and Richard Sarll acted as counsel for London insurers in a claim for a non-party costs order against a director and share holder of a company whose claim for an indemnity had been dismissed. The case puts beyond doubt the availability of disclosure and oral evidence in such proceedings.

2009 WL 1062979. Gavin Kealey Q.C. and Richard Sarll acted as counsel for London insurers in a claim for a non-party costs order against a director and share holder of a company whose claim for an indemnity had been dismissed. The case puts beyond doubt the availability of disclosure and oral evidence in such proceedings.

[2009] 1 Lloyd’s Rep I.R. 365. S. J. Phillips and Richard Sarll acted as counsel for Lloyd’s underwriters in a claim against a foreign coverholder for allegedly fraudulent accounting in the writing of motor insurance under a series of binding authorities. The defence was struck out.

7KBW nominated for 5 awards at the Chambers Bar Awards 2019

Richard Sarll is pleased to announce the publication of Lowndes & Rudolf, General Average and York-Antwerp Rules, 15th Edition, of which he is a co-editor together with Richard Cornah and Joseph Shead of Richards Hogg Lindley. The latest edition of Lowndes & Rudolf contains extensive reconsideration of the principle of substituted expenses following the decision […]

“He has made a real effort to understand the commercial realities of the business.”