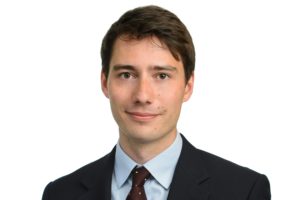 After joining Chambers Douglas spent three months as a Judicial Assistant in the Commercial Court, where he assisted in an eight-week civil fraud trial involving allegations of misrepresentation, deceit and conspiracy in relation to the sale of a major Ukrainian corporation.

Douglas has spent time on secondment in the shipping departments of two leading City law firms, where he worked on a variety of disputes arising out charterparties, ship sale and purchase contracts, and bills of lading. He has recently advised on a number of disputes relating to the Coronavirus outbreak, including ‘safe port’ obligations, force majeure and frustration.

Other recent work includes advising an EU company on compliance with global sanctions and anti-corruption laws, and providing evidence to a foreign court in relation to various aspects of the English law of marine insurance.

Before coming to the Bar, Douglas graduated from the University of Oxford with a First Class degree in Modern Languages. He speaks French, German and Swedish.

April 28, 2020Introduction COVID-19 is the most wide-ranging epidemic for a century. The World Health Organization (WHO) established its task force in early January 2020. On 30 January 2020, WHO described the epidemic as a public health emergency of international concern (PHEIC). On 11 February 2020, the WHO named the disease COVID-19 (before then it was novel […]Read more...

February 18, 2020On 30 January 2020, the World Health Organization (WHO) declared the outbreak of the Wuhan coronavirus (Covid-19) an international public health emergency. The WHO has not, as yet, recommended international travel restrictions. However, a number of governments are now denying entry to foreign nationals coming from China, while Australia and Singapore are refusing to allow […]Read more...