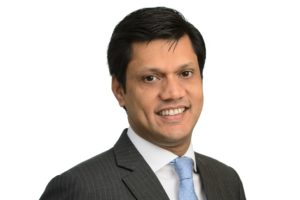 Ritin started his career in 1998 as an Associate in the Business Practice Group of Jones Day in its Cleveland office before relocating to India to practice corporate law.  He transitioned to a disputes practice in 2004 when he joined the Chambers of Ashok H. Desai, a Senior Advocate and formerly Attorney General for India. Ritin has been designated a Senior Advocate by the Supreme Court of India in 2019.

Ritin brings his experience as a corporate lawyer to bear on a variety of commercial and regulatory disputes, including in company, competition, insolvency and telecommunications law.  His practice spans appearances in the Supreme Court of India, the High Court of Delhi, the commercial tribunals situate in Delhi and before arbitral tribunals.

Ritin accepts instructions to appear both as counsel and as arbitrator in arbitral disputes, and as an Indian law expert in courts or forums outside India. Ritin is on SIAC’s panel of arbitrators.  He is a member of the ICC India Arbitration Group and the India Rapporteur for the 3rd Edition of the “ICC Guide to National Procedures for Recognition and Enforcement of Awards under the New York Convention”.

Ritin also teaches a course on the practice of commercial disputes at the Jindal Global Law School where he has been appointed Honorary Adjunct Professor of Law and Distinguished Professor of Legal Practice.

Since 2017, Ritin has been engaged in the following arbitral matters which may be disclosed:

Representative matters in Court since 2017 with which Ritin has been involved and which are a matter of public record are:

September 18, 20197 King’s Bench Walk is delighted to announce that Ritin Rai, Senior Advocate of the Bar of India, has accepted an offer of a Door Tenancy from Chambers. Ritin will join Chambers as a door tenant with effect from 18th September 2019. Ritin has had a stellar academic and professional career.  Having completed his legal […]Read more...